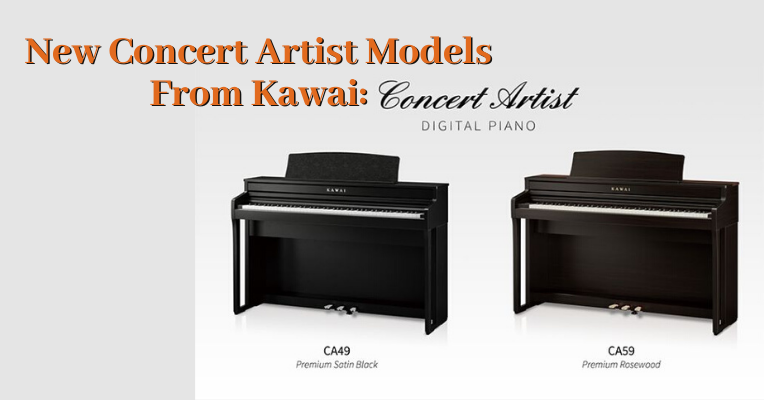 The CA48 and CA58 has been very popular and well received. I personally really like the CA48 and can not recommend it enough for those who are looking for a digital piano around $2,000 price range. Recently, Kawai has announced two new models to replace them: the brand new CA49 & CA59. Let me briefly show you what’s changed and if you should upgrade.

Kawai has been working with Onkyo for quite a while now. Their flagship CA99 & CA79 both have been equipped with Onkyo’s technology to produce a more rich and realistic sound experience through the speakers.

Now they are bringing the same technology to the new CA49 & CA59. A lot of hardware have been changed, from motherboard to amplifiers.

The end result remains to be seen. But if the CA99 & CA79 is any indication, we can expect an improved, higher quality sound on the CA49 & CA59.

Kawai has also redesigned the control panel for the new models. The buttons are round now and there’s an OLED display.

It looks pretty modern and the display can provide much more information than the 3-digit LED on the CA48.

This only applies to the CA59. It has a new sample from Kawai’s SK-5 studio grand piano.

So now we have two samples from the Shigeru Kawai series. I’m excited to see how the SK-5 sounds like on the CA59.

One of the missing feature on the CA48 & CA58 is the lack of Bluetooth Audio. You can’t stream music from your smart device to these pianos.

Now the new CA59 has this feature built in. It’s a really welcomed and highly demanded upgrade.

But this new feature is exclusive to the CA59 only. The CA49 still only has the Bluetooth MIDI.

Same like the Bluetooth MIDI, the ability to record and export to USB stick is a missing feature on the old models.

I’m happy to report that the new CA59 will have a USB to device port. You will be able to record and playback any files in MP3 and WAV.

What’s special is that you can also playback MIDI file from the USB memory stick on the CA59.

Again, this is a new feature exclusive only to the CA59.

Last but not least, both the CA49 and the CA59 have a new cabinet design.

Kawai has incorporate a taller body and rounded edges to give the new models a modern and premium aesthetic.

The new CA59 has some useful new features and might be worth the extra dollars.

However, the CA49 is pretty much the same as the CA48 expect a new control panel and a speaker system upgrade with Onkyo.

For now, I would wait to see how the price of the CA49 evolves. At the moment of writing this post, the new model is about $300 more expensive than the old CA48.

Leave a comment to let me know what you think of the new CA49 & CA59 from Kawai. And if you happen to have some experience with them, please share with us in the comment below.