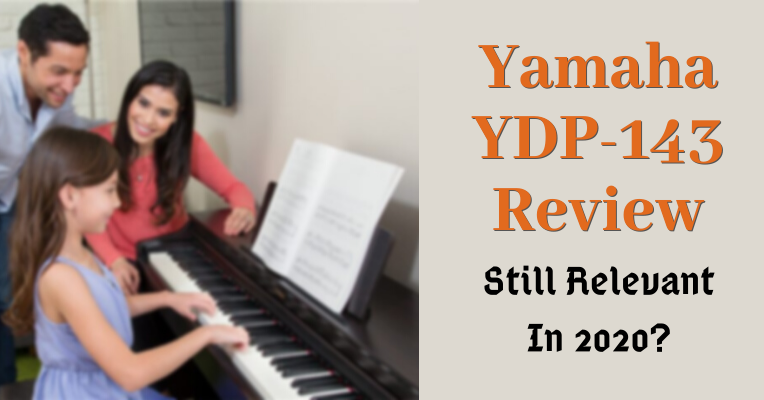 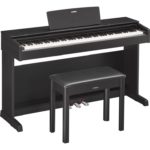 Launched in 2016, the YDP-143 quickly became a popular and well-received digital piano from Yamaha. It was later replaced by the newer YDP-144. However, not much has been changed. In this Yamaha YDP-143 Review, I’ll showcase this piano and maybe convince you that it can still be a value option today.

The Yamaha YDP-143 looks sleek. With straight lines at every edge, it gives a modern aura to the room.

It’s also not trying to fool you into thinking that it might be an acoustic upright. The thin cabinet makes it clear that this is a digital piano.

The key cover slides in and out.

You get to choose between Black and Rosewood, both have simulated wooden texture on the surface.

There is also a white version. However for some reason, its availability depends on your region.

The music rest of Yamaha YDP-143 is fold-able, which gives it a clean look when I’m not using it.

There is a tinny slide at the bottom to hold the pages. However, with the tilted back angle, the slide is often too small to hold any page from a book. It is nice to keep a single page in place though.

I would love to have the rest a bit wider. What’s more annoying is that the rest is not tall enough.

If you print your sheet music on A4 papers; as I sometimes do; the top half of the sheet will quite often fold itself over the rest.

One last complaint about the music rest is the curvy top side of it. I feel like that curve just ruins the whole style of the piano. However, that’s totally personal.

There are a few buttons on the left side. I like the single line of these buttons and the  choice Yamaha made for the collection of these buttons. I find these to be the most often used functions.

There are a lot more functions that you can change through a combination of buttons and keys. These will require the user manual.

On the right side, there’s the power button and a volume knob. I honestly hate that knob. Would much prefer a volume slide. I find it difficult to control the knob precisely and it looks ugly there.

Overall, the controls are clean and function. They are well-labeled too.

The Yamaha Arius YDP-143 comes with a full 88 keyboard. The keys are plastic with a glossy surface. The black keys do have a matte surface.

This could be annoying to some people as the keys can get slippery after a long play session.

I do like the red velvet at the end of the keys, which gives the piano a premium feel.

It is identical to the keys you would find in the Yamaha P45 as well as the YDP-103. They are weighted and graded with actual hammers in the system to mimic the feeling of an acoustic piano.

As I said in my Yamaha P45 review, this key action is very good for en entry level digital piano.

Bear in mind that the P45 costs less than $400 and the YDP-143 goes over a thousand. For this price, there are simply better key action elsewhere in the market.

This is where it starts to differ itself from cheaper choices like the YDP-103 or the P45.

It uses the Pure CF Sound Engine for the sampling and there is damper resonance as well. This is the sampling technology you will find in more expensive pianos like the YDP-163.

It does a good job of re-producing the sound experience of the Yamaha CFIIIS 9 foot concert grand.

Yamaha used something called ‘Stereophonic Optimizer‘ to enhance the sound quality with headphones. It works pretty well however the Binaural Sampling used in modern high end models is much superior!

Unfortunately, the pretty good sound sampling is somewhat undermined by the speakers equipped in the YDP-143.

There are only two 6 watt speakers. And again, that’s identical to the much cheaper P45 at $400.

They are loud enough to fill a room but the sound quality is a bit lacking.

This is actually my biggest complaint against the YDP-143. It is one thing to use a pair of monitors/speakers for a portable digital piano like the P45. It is very different for a piano like the YDP-143. Because that would ruin the whole furniture design concept and that leaves you with a compromise.

Pure CF sound engine is what I would consider the most outstanding feature that comes along with Yamaha Arius YDP-143. Even though there are now newer sound sampling from Yamaha, the Pure CF still sounds impressive and realistic.

Another feature that was a big deal back in 2016 is that the YDP-143 can connect to your iPad with USB and you can access all the features through their APP.

Unfortunately, we have seen some wireless connections via Bluetooth being used on digital pianos nowadays. This is where the YDP-143 doesn’t age well.

Here are some useful features built in the Yamaha Arius YDP-143. Most of them though require combinations of buttons and/or keys or through their APP with a USB connection.

Typically, you will have your Yamaha Arius YDP-143 delivered with a bench (depends on region), three pedals and a song book ’50 Greats for the Piano’.

But there are many different bundles offered by different vendors. You should definitely check them out in your regional vendors before making a purchase.

The sustain pedal supports half pedaling, which is good news.

The bench however is not height adjustable and many people complain that it’s too narrow.

A good pair of headphone is still highly recommended.

As for monitors/speakers, I guess it depends on if you want to compromise on sound quality or aesthetics.

The Yamaha Arius YDP-143 is an all rounder! It is solid in very aspect although there’s nothing really amazing about it.

I think it is ideal for beginners and casual piano players, who also want their piano to fit in a room and look good. Could also be a good choice for a secondary piano.

If you are somewhat advanced or if you are dead serious about your music, there are better options out there for the price.

In this Yamaha Arius YDP-143 review, I showed you that this digital piano is designed as an all rounder.

If you are looking for a piano for your living room that looks good and performs well, you can’t go wrong choosing the Yamaha YDP-143 for its price. I guess that’s what makes it one of the most popular digital piano in the market.

However, the Yamaha YDP-143 is after all quite old and technology in the digital piano industry has been moving forward every year. There are quite some competitions out there that make the YDP-143 less attractive.

These two are similarly priced, with the YDP-143 a hundred dollars cheaper.

The RHCII key action on the KDP 110 is significantly better than the GHS on the Yamaha. The RHCII is a triple sensor action and the GHS is dual sensor. It is also better in terms of responsiveness, expression and timing.

The sound engine on both models are both very good. However, the KDP 110 does have an edge that each note is individually sampled. It has also a much powerful speaker system than the YDP-143. The KDP 110 packs 40 watt speaker while the YDP-143 has 12 watt.

They have the same polyphony number. But the KDP 110 wins again with Bluetooth.

Overall, the Kawai KDP 110 is much better than the Yamaha YDP-143. You do get charged a lot premium for the Yamaha brand.

Another similarly priced model is the Roland F-140R. It is a very popular entry level digital piano from Roland.

The F-140R has much more features than the YDP-143. Not only does it also have Bluetooth, the F-140R has 300 more sounds to choose from. It also has a USB to device port and can record more songs internally.

Both instruments sound excellent. However, the GHS key action on the Yamaha is a bit lacking compare to the PHA-4 action on the Roland. Even though I’m not a fan of the simulated escapement on the PHA-4, it does feel more responsive and expressive than the GHS.

I would recommend the Roland F-140R over the Yamaha YDP-143 for its superior key action and more advanced features.

Leave a comment to let me know what you think of this review. And if you happen to have some experience with the Yamaha YDP-143, please share with us in the comment below.