Best Hybrid Digital Pianos 2020: The Best Of Both Worlds 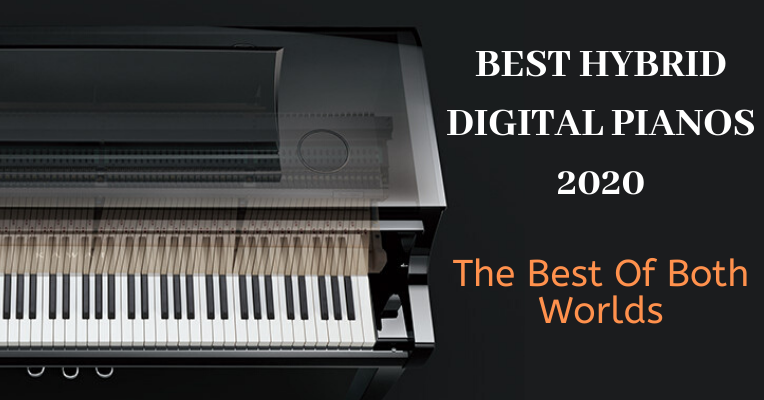 We all love the convenience and functionality of our digital pianos. But there’s always an itching in our heart: if the keys could feel a tad more realistic. Key actions on digital pianos have come a long way and none of us could deny the progress in the last few years. However, for those of us that’s looking for the best of the best, an actual key action from an acoustic grand would be perfect. Here’s my pick of the Best Hybrid Digital Pianos in 2020 and all of these models come with a real acoustic action.

Kawai has been producing world class acoustic grand pianos for 90 years and in recent years it has provide us with some outstanding digital pianos with industry leading key actions. In 2017, Kawai’s 90’s anniversary, the Japanese manufacture announced their brand new hybrid digital piano the NV10. It is the only hybrid digital model on Kawai’s line up, and the NV10 has since been praised and loved by many serious pianists.

As a hybrid digital piano, the NV10 uses Kawai’s Millennium III Hybrid action specially designed from the key action of Kawai GX acoustic grand. It is mostly identical to its acoustic counterpart. The keys are wooden and the hammer is made of ABS carbon. Each hammer is weighted exactly like the one on the acoustic GX. To capture the hammer movement and the timing of it hitting the virtual string, Kawai uses a non-contact optical sensor.

The NV10 also has a real damper mechanism placed behind the key action. It has added weights for each individual key that is equivalent to the weight of the wood and felt parts from an acoustic grand. When the sustain pedal is pressed, the whole damper bar is raised just like an acoustic instrument and you can actually feel the weight difference on your fingers. The NV10 is currently the only hybrid digital piano that equips such mechanism.

Being a newly introduced model, the NV10 has all the most recent and advance technology from Kawai, including the newly developed SK-EX Rendering sound engine. This engine on the NV10 is dedicated only to the pianist mode. It samples Kawai’s very best acoustic concert grand, the Shigeru Kawai SK-EX. Not only is each key sampled at different levels, but also from multiple positions in the concert grand. It helps recreate a broader range of tonal characteristics as well as an improved responsiveness between the key press and the piano sound. Kawai further enhance the sound with computer modeling to enrich it with all the physical interactions between components in an acoustic concert grand. All together, the SK-EX Rendering sound engine creates one of the most realistic, responsive, dynamic and precise piano sounds on an upright digital piano. You also get Kawai’s 9 foot concert grand EX, chamber grand SK-5, its upright K-60 and numerous other instrument voices with Kawai’s Harmonic Imagining XL sound engine. The NV10 has a maximum polyphony of 256 notes.

Kawai has teamed up with Onkyo, one of the world’s best premium audio equipment manufacture, to produce the best sound deliver system on their digital pianos. The NV10 uses three 45 watt amplifiers to drive 4 main speakers, 2 tweeters and 1 woofer. The tweeters help produce crystal clear high frequency notes and the woofer enhance the bass range and also channels the vibration to the keys and pedals. These vibrations adds another layer of realism since you would feel the same physical sensation while playing on an acoustic grand piano.

Like many premium models that have been recently introduced, the NV10 is equipped with a 5 inch touchscreen just like your cellphone. This user-friendly feature make tweaking and tuning the NV10 a fun and intuitive experience. Using Kawai’s Virtual Technician app on the touchscreen, you can easily adjust up to 19 parameters to fine tune the sound to your liking.

The NV10 can record 3 songs with one track under Pianist mode and 10 songs up to two tracks under Sound mode. It can also export MP3/WAV/SMF files to a USB stick with its USB to device port. Furthermore, the NV10 also has Bluetooth connectivity to link with any smart device to enhanced functionality.

Priced around $10,000, the Kawai Novus NV10 is the best hybrid digital piano on the market right now. You will enjoy all the benefits of having a digital piano without the compromise on key action and sound. It really combines the best of both worlds.

Casio has been in the digital piano market for a while now and has been praised for the value it offers to the consumers. You can find amazing instruments from Casio usually at a much low price range than their equivalent models from other manufactures. This stays the same with Casio’s hybrid digital pianos, the GP series. The GP-510 is a brand new model launched in 2019 and it has been praised by many.

Since Casio has no experience building acoustic grand pianos, they team up with the German piano manufacture C. Bechstein, who has been producing top quality acoustic grand pianos from the 19th century. The complete key action of the GP-510 is designed and manufactured by C. Bechstein, using some of the best materials in the world. The keys are made of aged premium spucewood from Austria and are exactly the same as the keys used on their acoustic grand. Attached to the keys are hammers not only weight the same as an acoustic but also moves like one. Three sensors are being used in the action to measure and capture the movement of the keys and hammers. While developing the key action for the GP-510, C. Bechstein took the opportunity to get rid of the escapement that’s a necessity of an acoustic key action and produce an action that’s far more responsive and fast. The keyboard on the GP-510 can repeat note even faster than an acoustic grand. The keys feel firm but smooth. It is a very enjoyable keyboard to play.

You get three world famous grand piano tones on the GP-510: Berlin, Hamburg and Vienna. Each has its own distinctive tonal characteristics and is sampled by Casio’s AiR Grand Sound Source engine. Computer modeling technology is used to further enhance the sound with different resonances and other physical noises. The GP-510 is capable of a maximum polyphony of 256 notes.

The speaker system consist of 4 amplifiers firing 6 speakers with total 100 watt output. It is quite a powerful system at this price range. The two main speakers are placed beneath the keyboard and facing downwards and there is a lid at the top of the cabinet that you can open to allow more sound coming from the top and towards the player. This creates an envelope effect the result is an immersive re-production of the acoustic experience.

The Casio GP-510 can record internally one song with up to two tracks. It is also capable to export audio recording in WAV format to an USB stick with the USB to device port.

This new hybrid model from Casio has seen quite a few upgrade from the previous GP-500. It is currently the best Casio has to offer is definitely one of the best hybrid digital pianos this year.

At a price range close to a proper acoustic grand piano, hybrid digital pianos need to offer a playing experience similar to an acoustic grand to have a reason to even exist. As the flagship of Yamaha’s hybrid line, the N3X does deliver a state of the art piano experience.

The Specialized Grand key action on the N3X is directly inherited from Yamaha’s renowned acoustic grand pianos. For a large part, they are identical. The keys are wooden and have all the physical components of an acoustic key action. If you are looking for a digital piano with the most realistic key action, it doesn’t get better than the keyboard on the N3X. To further capture every nuance of your play, Yamaha uses two non-contact optical sensors that are able to pick up the slightest movement of the keys and hammers. One optical sensor is placed beneath the key to capture the speed and length of each key press. The other optical sensor is on the hammer to measure the precise timing and strength of the hammer hitting the virtual string.

For advanced pianists, the pedals are also crucial for subtle expressions during performance. The Specialized Grand Piano Pedal system that Yamaha has designed faithfully reproduce the sensation of grand piano pedals. Thus provide the possibility of delicate pedaling for finely nuanced expression. It mimics the three stages of a grand piano pedal, light at first, heavier through the travel and lightens again in the end.

Both the keyboard and pedals are equipped with Yamaha’s Tactile Response System to recreate subtle vibrations that you would feel on an acoustic grand piano. These physical sensations are registered on a subconscious level and help convince your mind that you are playing on an acoustic grand, even with headphones on.

The N3X uses Yamaha’s Spacial Acoustic Sampling technology. Not only is each note sampled at multiple levels, it is also sampled at four different position on the soundboard. The samples are then produced by four sets of speakers at the exact same spot that they are recorded. This way, the sounds of Yamaha’s CFX and Bösendorfer Imperial are most faithfully recreated. The samples are further enhanced by Yamaha’s Virtual Resonance Modeling to add the reverb effect that an acoustic grand produces.

On the headphone side, the N3X uses binaural sampling from Yamaha’s CFX concert grand. This technology uses a set of microphones to pick up the sounds of the CFX from locations that are close to human ears. The result is so immersive that if you close your eyes, you would feel like you are performance in a music hall on the 9 foot CFX.

The N3X has a maximum polyphony of 256 and sound is delivered through 4 sets of speakers, each placed at the exact same spot where the sample is recorded. Each set consists three speakers the size of 16cm + 13cm + 2.5cm. There is also an actual soundboard installed on the N3X and it is driven by an oscillating transducer to vibrate alongside the speakers to create a more enveloping sound experience. This sophisticated system uses 15 amplifiers totaling 615 watt.

Being a hybrid digital piano, the N3X is able to record WAV recording to a USB stick with the USB to device port. It also has XLR balanced audio output that allows for a professional and stable output to any external amplifier/speaker system.

At around $20,000, the N3X is similarly priced like many acoustic grand pianos. The key action and playing experience is nearly identical and the sound is so close that with the benefits of a digital piano, the Yamaha Avant Grand N3X might be a better choice for your need than an acoustic grand. It certainly is one of the best hybrid digital pianos you can find on the market, with a price.

Let me know if I missed any good options out there. If you have any experience with any of the these digital pianos, please leave a comment and share it with us. For other type of digital pianos, check my best picks of the year.

1 thought on “Best Hybrid Digital Pianos 2020: The Best Of Both Worlds”