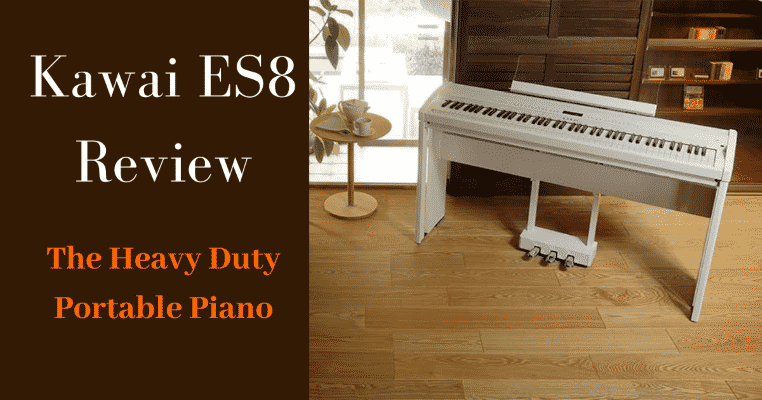 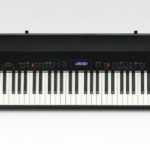 As a professional gigging musician, you are asking a lot from your instruments. They not only have to have the best sound and action, but are also built to endure constant transportation and the occasional accidents. Such a piano is not going to be compact and lightweight. Nor would it be cheap in price. One of the most popular models is the ES8 from Kawai. It is built like a tank and has wonderful sound as well as realistic key action. Honestly, what more do you need? In this Kawai ES8 review, let’s find out if this $2,000 premium model is worth the money.

The frame of Kawai ES8 is made from aluminum. Many gigging pianists have reported that the ES8 is built like a tank. You don’t have to extra careful while transport this instrument.

The strong frame also contributes to the playing experience. It’s very sturdy even when you are smashing the keys with all the emotion you can express. When you put the ES8 on a stand and start playing, you quite often forget that you are playing a portable digital piano.

The sides of the Kawai ES8 are equipped with curved wooden panel that gives the ES8 a classic and premium ascent. These panels also have practical functions as lifting handles. I think it’s a very thoughtful design, considering this digital piano is aimed at gigging pianists.

You can choose between two different colors depending on your region. There’s the Gloss Black and the Snow White. Both surfaces are matte finish.

The included music rest is not the transparent plastic one you have probably seen from marketing materials. That one comes with the HM-4 stand.

The included music rest is detachable and is made out of metal with an industrial vibe to it. It’s not ugly but I certainly prefer the transparent one that comes with the stand.

For $2,000, I would expect Kawai to put their best music rest in the package instead of selling it separately with the stand. If you buy the stand, you will end up with two music rest. I’d say this is a minor mistake from Kawai.

The good thing about the included music rest is that it’s quite big. It’s wide enough to display three A4 papers together and tall enough to support single paper sheet.

The best part of this music rest is that it’s very deep. You can comfortably put in iPad in front of your score book and still have the room for a marker.

The control panel you will find on the Kawai ES8 consists of one volume slider, 26 buttons and an LCD display. Each button also has its own LED indicator.

With so many buttons and a display, you can access all the functionality of the ES8 without combinations of buttons/keys, like many of ES8’s competitors do.

The buttons are well labeled. It is very intuitive and gives you the ability to change settings on the fly while performing on stage. 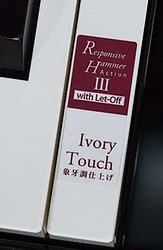 The Kawai ES8 comes with a full 88 keyboard.

The keys are plastic with synthetic Ivory surface, which helps with grip and absorbs finger moisture during long playing sessions.

The sturdy build quality of the Kawai ES8 comes with a cost.

Thanks to its metal frame and wooden side panels, it is on the heavy end of portable digital pianos. A gig bag with rollers becomes almost a necessity for the ES8 if you are to carry it around.

When you are shopping for a digital piano around this price range, The most important aspect you need to pay attention to is the key action.

And I have good news for you. The ES8 uses Kawai’s Responsive Hammer III keyboard action. It has all the feature you want and is probably the best plastic key action on the market right now.

There are actual hammers in the action to simulate a more realistic feeling. The weight of the hammers are graded. As a result, the bass is heavier and the tremble is lighter, just like an acoustic piano.

Kawai uses three sensors in this key action. It ensures fast repetition and more accurate control of the keys.

Being a top of the line premium instrument, the Kawai ES8 is also equipped with counterweights in both its white and black keys.

These meticulously calculated weights make the keys much more balanced.

You will notice the keys are lighter when you play soft passages. Meanwhile, when you want to express something stronger, there are more substance to your force.

Another feature that’s also exclusive to high-end digital pianos is the simulated let-off effect. It is to re-create that subtle notch feeling when play on a grand concert acoustic piano, also called ‘escapement’.

Overall, the key action of ES8 feels smooth and responsive. It certainly is one of the best plastic key actions available.

It’s no concert grand, but it comes really close. If you are practicing on an ES8, you will not have any trouble switching to a concert grand.

Being top of the line of the ES series, the Kawai ES8 has the best sound quality Kawai has to offer.

It uses Kawai’s most advance sound engine called Harmonic Imaging XL. This is the sound engine you can find on other premium digital pianos from Kawai, like the CA 98.

Each note is individually sampled and the Harmonic Imaging XL extends the sample duration up to 120%. The end result is a more natural and more detailed re-production.

And you are not just getting one concert grand with this advanced sampling. You get three world-class concert grand, the best Kawai has to offer.

The Kawai ES8 is equipped with two 15 Watt speakers. They are located on each side facing upwards.

It’s a simple setup like many other portable digital pianos. Surprisingly however, unlike many of its competitors, the Kawai ES8 produces excellent sound quality with its speakers.

It is loud enough to fill a big living room and the volume is close to an acoustic upright.

And even at maximum volume, the sound quality remains detailed and natural.

In my opinion, the Kawai ES8 does not need external monitor/speaker except for the most professional performance.

If you ask me, the best features of the Kawai ES8 are the key action and the sound engine. These two combined makes the ES8 one of the best digital pianos under $2,000.

Here are some other features that you might find useful.

The Kawai ES8 comes with a music rest (metal frame), sustain pedal and a power cable.

The sustain pedal is Kawai’s model F-10H pedal unit with half pedaling support.

It is a decent pedal with realistic feeling. The resistance and weight of it does feel close to a real pedal from an acoustic piano.

You will also need to purchase a stand and bench for the ES8.

Depends on your need, you can choose between a fixed stand HM-4 designer stand, or a portable one for gigs.

A good pair of headphones is always recommended for a digital piano.

Due to its high performance speaker system, you will only need external monitor/speaker for your most professional gigs.

One more thing you might need is a travel bag with rollers. Because the ES8 is actually quite heavy, you’ll stress your muscles if you carry it to a gig and those stressed muscles could be a problem for your performance.

The Kawai ES8 is recommended for intermediate and advanced players, especially gigging players.

It would also be an excellent choice for home use. If you couple it with the designer stand and the triple pedal unit, it would look awesome in your living room.

For beginners, I can only recommend it if money is not an issue for you. Many advanced features will not be useful to you in the beginning of your piano learning journey.

If you are a beginner and is looking for a portable digital piano, check my reviews on the Yamaha P45, or the Kawai ES110!

If portability is not needed, I’d recommend the Casio PX870!

The Kawai ES8 is an excellent portable digital piano. In fact, it is one of the best digital piano you can find under $2,000.

It offers realistic key action with triple sensor and counterweights.

The best sound engine Kawai can come up with and the great speaker system gives the ES8 amazing sound quality both with headphones and its built-in speakers.

The ES8 is so customizable that it would take you a few hours to understand each setting. Once you fine tune the instrument, you can save your settings and switch to them easily on stage.

There are only two things I could want more with the Kawai ES8. Bluetooth would be nice to have. And the instrument is a bit on the heavy side.

The main competitor of the Kawai ES8 is the Roland FP-90. The Yamaha P-255 is somewhat inferior with a low price tag.

First major difference is in the key action. While FP-90 uses a combination of plastic and wood, the keys on the ES8 are fully wooden. The two instrument feel quite different when you play them side by side. The FP-90 is much lighter than the ES8. Although in my own opinion, the ES8 feels slightly more natural and real. The difference is minimal and subjective.

Sound wise, the FP-90 uses full modeling while the ES8 combines sampling and modeling. I still find the ES8 approach more natural but Roland has come a long way with their modeling technology and the result is very close.

Both instruments are highly customizable. The FP-90 has Bluetooth while the ES8 doesn’t.

The speaker system on the FP-90 is no doubt much better than that on the ES8. It has two tweets that the ES8 lacks and it has a much stronger output of 60 watt to ES8’s 30 watt.

The FP-90 also has a microphone jack that the ES8 lacks. You will be able to sing along on the FP-90.

Both FP-90 and ES8 are amazing instruments aimed at stage performance and they are similarly priced. You can’t go wrong with either of them. The choice in the end depends on your personal preference with the key action and sound engine.

For more details about the Roland FP-90, click here for my full review.

Let me know what you think of this review and if you happen to have some experience with the Kawai ES8, please share with us in the comment below.