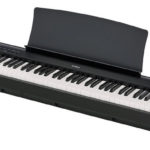 When people ask me which digital piano they should buy to begin learning the instrument, I often recommend either the Yamaha P45 or the Kawai ES110. For beginners, you really don’t want to invest too much in the beginning because there is a good chance that this passion of yours cools down and the expensive piano you bought becomes a furniture for the living room. The Kawai ES110 is highly focused on piano play experience. By cutting out bells and whistles, you get a really impressive playing experience with a competitive price.

Being a portable stage digital piano, the Kawai ES110 is compact and lightweight. Other than that, it’s quite basic.

Most of your money goes to the key action and sound, which I think is a good thing.

The frame is plastic with a matte finish. Doesn’t really feel expensive to the touch. As for colors, you can choose between black and white.

The Kawai ES110 comes with a detachable type music rest.

It’s sizable and long enough to display several pages at once.

There are subtle curves on the edge of the music rest, which gives it a stylish accent.

What I also like about the music rest is that the bottom is sloped to prevent pages from flipping.

Like most other portable digital pianos, the control panel of the Kawai ES110 is very bare bone and many functions require a combination of buttons and keys. You will want to read through the user Manuel thoroughly.

The 88 keys of the Kawai ES110 are plastic with matte finish on the surface.

The matte finish is supposed to help with grip during long playing session and I’m sure it does help.

However, for my experience, it doesn’t make a significant difference.

If you usually play long sessions and your fingers are prone to sweat a bit, you might want to look at keys with simulated ivory/ebony.

One thing I’ve also noticed is that there seems to have quite a gap between the keys.

I would say the Kawai ES110 key spacing could use a bit improvement. Although some would argue that even concert grand could have some slight uneven spacing between their keys and it’s nothing to worry about.

You can check this Reddit discussion and decide for your own.

Kawai is famous for its realistic key actions on its digital pianos. Although the best of their key actions are exclusive to the high end product line, the one you will find in the ES110 is pretty impressive.

The 88 keys on the Kawai ES110 are weighted and graded.

Kawai uses actual hammers instead of springs, which creates a more realistic feeling to the keys.

The positions of the key pivot point and the hammer pivot point give the keys a light and responsive action.

What further improves the responsiveness and control of the key movement is the placement of the dual sensor. The sensors are beneath the middle of the keys rather than near the key pivot point. This sensor placement makes it easier to play faster and you get a more immediate response from the key movements.

Overall, the key action of the Kawai ES110 is excellent for its price. Many, including myself, prefer the Responsive Hammer Compact compare to what other brands can offer at the same price range.

Kawai is a world-famous manufacture for acoustic grand concert pianos.

On this digital piano, you have access to the sound of Kawai’s top of the line EX concert grand.

Each note is individually recorded with harmonic imaging technology to capture the subtle tone difference when the key is being pressed with different force.

The sound is then enhanced by adding reverb and resonances to create the most authentic, dynamic and rich in detail reproduction of their concert grand.

In addition to the piano sounds, you will find a full list of other instruments in the features section below.

You can fine tune the sound to your liking using an app that connects to the ES110 via Bluetooth.

There are two 7 watt speakers in the ES110. To fully utilize the amazing sound recorded in the ES110, you would want to connect a pair of external speakers or monitors.

There are some pleasant features built in the ES110, including the ability to connect to a smart device wirelessly via Bluetooth.

Below you will find a list of its main features.

The Kawai ES110 comes in with a music rest, power adapter and a sustain pedal. 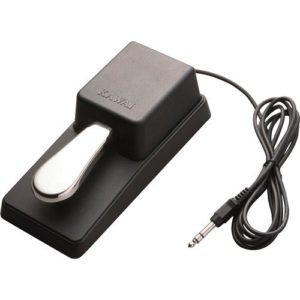 For home use, you will need to purchase a stand and bench.

One good news here is that the sustain pedal included is high quality and supports half pedaling.

A good pair of headphones is a must if you don’t want to annoy your neighbors with your practicing.

To perform on stage or for your family and friends, a good sound system or monitors are recommended.

I can see many applications of this excellent digital piano.

Whether you want to use it for gigs or only use it for practice at home, the Kawai ES110 will not disappoint you.

It is also suited for both beginners and intermediate players since its key action allows for fast and expressive performance and the sustain pedal support progressive half-pedaling.

In addition, the Bluetooth connectivity makes it perfect for someone who wants to learn piano online.

If your budget is 800 dollars, you can’t go wrong by choosing the Kawai ES110 and you won’t feel the need to upgrade for years to come.

For its price, the Kawai ES110 offers amazing value.

It is considered by many the best digital piano under 800 dollars. After reviewing it, I tend to agree on that assessment.

Whether you want to take it on the road or just use it at home, the Kawai ES110 is a great choice.

Sound engine on the ES110 is also significantly better compare to the engine used on the P45. Not only is the recording more authentic, there are also reverb and resonances to mimic the sound wave bouncing around inside and outside the piano. You can easily tell the difference between the two models.

The Kawai ES110 has a maximum polyphony of 192 notes, which is a lot more than the 64 notes on the P45. It also has an internal recording function and Bluetooth, while the P45 has neither. In addition to that, the sustain pedal that comes with the ES110 is an authentic pedal with half pedaling support. But the pedal with P45 is a simply binary foot switch.

Overall, the Kawai ES110 is more than worth the extra dollars compare to the Yamaha P45. If you have the budget, go for the ES110 and you will be very happy with it.

For more details about the Yamaha P45, read my full review here.

Click here for my full review on the Yamaha P125 and where I compare the two models.

These two cost around the same price and are competing head to head on the market right now. They are both really good digital pianos and you can’t go wrong with either.

The key action on the Kawai ES110 is in my opinion better than the one on the Roland FP-30. It feels more authentic and somehow more consistent. The RHC on the ES110 does not have the ‘escapement‘ effect that you will find on the FP-30. Depends on your take on the escapement, it can be an advantage or disadvantage. Personally, I don’t really like the escapement feel on the FP-30 so I would prefer the key action on the ES110.

Sound wise, the two models are equally impressive. The FP-30 does have a slightly more powerful speaker system. A more significant difference is the characteristic of the sounds. It is largely dependent on personal taste. I feel the sound of the ES110 is more suited for classical music while the FP-30 sounds more versatile. Hard to say which one is better.

The ES110 also comes with a much better pedal than the FP-30.

If you ask me, I would recommend the Kawai ES110 for it’s more authentic key action, larger polyphony and better pedal. But you really can’t go wrong with the Roland FP-30.

For more details about the Roland FP-30, click here to read my full review.

Let me know what you think. If you have any experience with the Kawai ES110 or if you have any question about it, please leave a comment below. 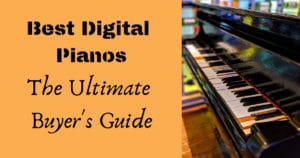 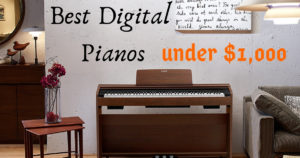