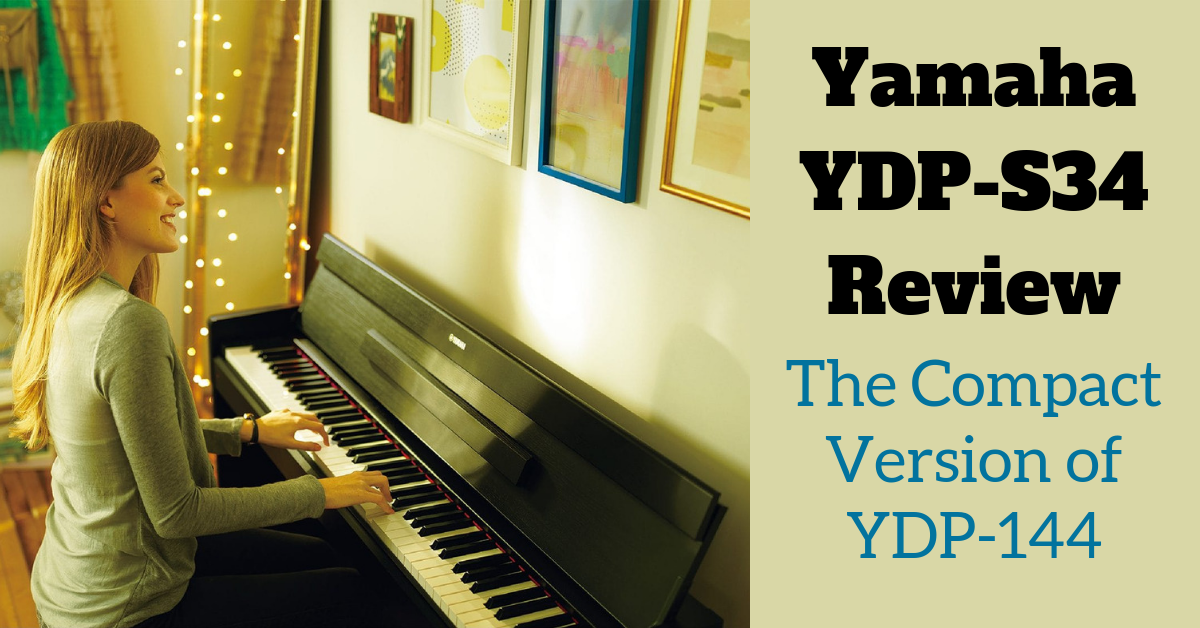 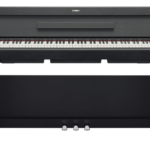 The Compact Version Of YDP-144

Do you like the Yamaha YDP-144 but want it to look even more compact? The YDP-S34 might be your answer. It is in many ways identical to the YDP-144 but has a distinctive compact design. Let’s explore further in this Yamaha YDP-S34 review about the look, the playing experience and the features of this contemporary digital piano.

The Yamaha YDP-S34 is a console type digital piano. However, unlike other models in from Yamaha, the YDP-S34 has a compact and futuristic style.

There is no lifted cabinet. When you close the key cover, it’s an entirely flat surface. 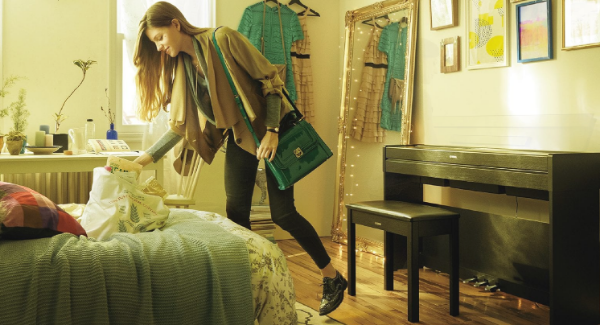 The key cover is a folding style one just like what you would find on an acoustic upright piano. It does have the slow-close feature that prevents the cover from slamming on the keyboards.

The side panels of the stand are also different from other models. They are solid panels with full width of the side of the instrument.

The flat top and the solid side panels create a compact and modern aura to the piano. It looks really stylish, I must say.

There are two finishes you can choose for the YDP-S34, the Black Walnut and the White Satin. They both have simulated wooden texture on the surface.

Like a traditional upright acoustic piano, the music rest on the YDP-S34 is hidden inside the key cover.

Once raised, you can flip down the panel and rest your sheet music on it.

The benefit of this kind of music rest is that it’s usually very wide and tall, which means you can display several pages at once if you print your sheet music on A4 papers.

It’s also nice to see that Yamaha has added some page holder mechanism on the front end of the music rest. This works well to prevent pages from sliding down the rest.

Overall, I enjoy using this type of music rest much more than the more common stand-alone music rest. When I put down the key cover, the rest is entirely hidden and when I put it into use, there are more than enough place to display as many pages as I want.

The controls on the YDP-S34 is identical to the control panel on the YDP-144. It is split into two parts.

On the left side, there is a single line of 7 buttons consisting of the most used functions and settings. Four of the seven buttons also has LED indicators. 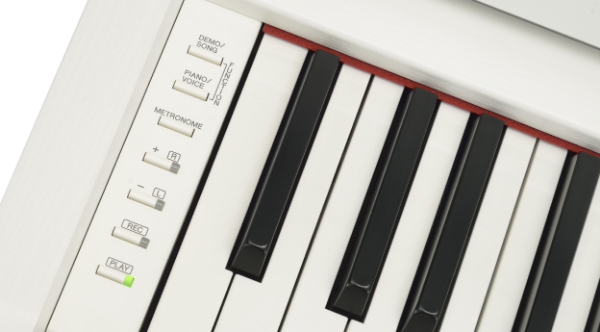 Alternatively you can use the Smart Pianist app on your iOS device to tweak and customize the Yamaha YDP-S34.

The Yamaha YDP-S34 has a complete 88 piano keyboard.

The keys are plastic and don’t have the more advanced synthetic Ivory/Ebony key tops.

Instead, the white keys have a glossy finish while the black ones has a matte finish. This is consistent to modern acoustic pianos.

I’m happy to see that Yamaha has kept the red velvet at the deep end of the keyboard. I think it adds a nice accent and a touch of tradition to this otherwise futuristic instrument.

Being compact is the selling point of the YDP-S34. It is very slim, so much so that you can even place it in the hallway and you will be able to play it comfortably.

The key cover opens to an angel so that you can read the sheet music comfortably. This means that you need to leave a few centimeters (about half an inch) between the back end of the piano and the wall.

The keys are weighted with actual hammer in the mechanism and the weight is graded meaning the bass keys will feel heavier than the treble keys.

This is the entry level key action from Yamaha. It’s very light to the touch.

Noise from keystroke are noticeable however much softer compare to other entry level digital pianos.

The touch sensitivity is adjustable to fit your need. We’ll discuss that in the feature section of this review.

One downside of the key action is that it uses only two sensors. This makes it harder to play fast repeated notes and also harder to control the sound while doing so.

The GHS also does not have very good dynamic range. I find it difficult to express emotions when playing on it.

Consistent to other models in the Arius line, the Yamaha YDP-S34 features the CFX sound engine.

The CFX sound engine also features Damper resonance, String resonance as well as key-off samples. These are important nuances to create an authentic sound of an acoustic piano.

Unfortunately, just like the YDP-144, the sound quality of the YDP-S34 is hindered by the weak speaker system. It has two 8 watt speakers.

While the speakers are loud enough, they don’t produce very good sound quality. The mid-range is adequate but the bass and tremble sounds muffled.

It is an awkward situation. To fully utilize the CFX sound engine, you will need external monitor/speaker system. However, that would compromise the sleek and compact aesthetics of the instrument.

The Yamaha YDP-S34 is not packed with features. The sound selection is limited and it doesn’t have Bluetooth for easy connectivity.

Yamaha makes a big selling point of its Smart Pianist app on iOS devices. And yet, to utilize that on the YDP-S34, you would need an USB cable and a dongle to connect your smart device. Not the best solution in 2019!

Here’s a list of features on the brand new Yamaha YDP-S34:

Being a console style digital piano, the Yamaha YDP-S34 comes with three piano pedals. They are identical to the pedals you would find on an acoustic piano. They are the damper/sustain, sostenuto, and soft pedal.

However, I suspect that this is a different pedal unit from the one on the YDP-144. The pedals do not respond well and they feel quite clumsy. They are also significantly noisier than the pedal unit on the YDP-144.

If you want to truly enjoy the Yamaha CFX sound, it is recommended to use external monitor/speaker with the YDP-S34. The internal speaker system simply doesn’t do the sound engine justice.

The Yamaha YDP-S34 is best suited for beginners, due to the entry level GHS key action. Once your skill level has improved, you will find this key action lacking.

You can also use it as a secondary piano for home practice. The compact size and the contemporary look make it an ideal instrument for that.

For less than $1,000, the Yamaha YDP-S34 is a beautiful digital piano that offers entry level playing experience.

It has great sound engine but the basic key action and the weak speaker system means that you might have to upgrade in the future.

These two instruments are identical in many ways. The only major difference is the look.

While the YDP-S34 is compact and futuristic, the YDP-144 is a more traditional looking digital piano.

Being $100 cheaper, the YDP-S34 would be my choice since it would fit and look better in a home setting.

For more details about the Yamaha YDP-144, click here for my full review.

The F-140r from Roland is another compact and sleek looking digital piano. It is about $200 more expensive than the YDP-S34.

The key cover of the F-140r has a different mechanism. It slides open with the cover folding into half.

The Roland F-140r features a more advanced key action, the PHA-4. It has synthetic Ivory keytops and simulated let-off effect. The playing experience is a lot more authentic, natural and expressive than the GHS on the Yamaha.

Overall, the Roland F-140r has the same compact and sleek look but offers a much better piano experience than the YDP-S34.

It is a triple sensored key action while the GHS on the Yamaha is dual sensored. The control, timing and expressiveness of the RHCII create a natural playing experience.

Personally, I would recommend the Kawai KDP 110 even though it’s about $200 more expensive than the YDP-S34.

It doesn’t have the compact and sleek look of the YDP-S34 but does have many advantages.

The Casio play a lot more expressive and grants you far more control than the Yamaha.

I do like the Yamaha CFX sound a lot more than the Casio. It’s more much detailed and just sounds lovely with headphones.

However, the weak speaker system on the YDP-S34 is again a big disadvantage comparing to the Casio. The PX-870 features two 20 watt amplifiers firing 4 speakers in two directions. Although I find the base notes on the PX-870 sound a bit muddy through its speaker system, it is still a better experience than the YDP-S34 at high volume.

The Casio PX-870 does not have Bluetooth, just like the YDP-S34. However, it does feature 256 polyphony notes comparing to the 192 on the Yamaha. The Casio also has a USB to device port that support exporting recordings in WAV format.

The Casio PX-870 is my pick for best console style digital piano under $1,000. And compared to the YDP-S34, the PX-870 still wins with its better key actions and more advanced features.

For more details about the Casio PX-870, click here for my full review.

Leave a comment to let me know what you think of this review. And if you happen to have some experience with the Yamaha YDP-S34, please share with us in the comment below.