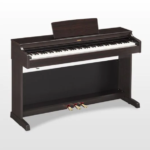 The Yamaha YDP-163 is a very popular piano since its release in 2016. You might be wondering if this is still a good choice in today’s market. In this Yamaha YDP-163 review, I will go through all the pros and cons of this upright style digital piano. But most importantly, I want to explain why I do not recommend this model in 2020.

Yamaha YDP-163 is a console style digital piano. I quite like the look of it. It has a healthy mix of traditional upright piano and a modern digital piano.

It would fit comfortably with most modern home decor. However if you have an extreme version of minimalism decor style, the YDP-163 would look somewhat out of place. It does help if you can get your hands on the white version, since that finish looks a lot cleaner.

Compared to the YDP-143, the cabinet of the 163 is slightly lifted. This creates a beefy and more premium look of the instrument.

One more difference compared to the 143 is that the 163 comes with a headphone placeholder. This is a convenient feature that I’m happy to see on any digital piano.

The YDP-163 also features the sliding key cover. It is well designed and well built. The movement of the key cover is very smooth.

Depending on your region, there are four different finishes you can choose from for the YDP-163. The Black Walnut, Dark Rosewood and the White Ash all have simulated wooden texture. The White version on the other hand, has a smooth matte finish all over. I find this complimenting very well to the colour.

The music rest that comes with the Yamaha YDP-163 is foldable. You can fold it backwards and create a flat surface when you are not playing the piano.

The look of the music rest is simplistic. It is angled slightly backwards, which creates a comfortable experience to read your sheet music.

The page holder at the bottom of the music rest is however very small. It sometimes fails to keep my sheet music from sliding down.

I have some issue with the size of the music arrest. It is neither tall enough nor wide enough. It works well with a scorebook. However if you print your sheet music on A4 papers, like I often do, the pages will sometimes fold on itself over the music rest.

Just like the YDP-143, the control panel of the Yamaha YDP-163 is divided into two parts.

On the right side of the keyboard, you have the power button and the volume knob.

On the left side, there is a single line of buttons. I find this to be a good selection of most used functions.

To access more advanced functions and settings, it requires a combination of buttons and piano keys. This is quite common with digital pianos at this price range.

The keyboard of the Yamaha YDP-163 consists of 88 piano keys.

The keys are made of plastic. Unlike the YDP-143, the keyboard of the 163 features synthetic Ivory key tops. This gives the keys a slightly yellowish tint.

At the deep end of the keyboard, there is a single line of red velvet. This adds a nice accent to the instrument and creates a more premium look.

The keys on the YDP-163 appear to be well built and evenly spaced.

The Yamaha YDP-163 arrives in a box and some assembly is required. The main body of the piano is quite heavy and it is definitely a two men’s job. Make sure you have a friend or family member to help you with that.

The Yamaha YDP-163 features a more advanced key action compared to the YDP-143. It has the GH3 key action from Yamaha.

The GH3 is a triple sensor key action that adds more control and expression especially during fast passages.

Each key is individually weighted and graded. There is an actual hammer behind each key to create an authentic feel to the touch.

Just like an acoustic piano, the left side of the keyboard feels heavier and gradually becomes lighter when you move towards the right side.

Compared to the GHS action on the YDP-143, the GH3 does feel more responsive and gives you more control.

However there is one major issue with this key action. The GH3 feels unnecessarily heavy. The keys are stiff and it almost feel like they are fighting against your fingers.

For me personally, it is hard to choose between the GH3 and GHS. They both have their pros and cons.

However with so many other key actions on the market right now, I can honestly say that the GH3 action on the Yamaha YDP-163 is not my favorite.

The sound engine featured on the YDP-163 is exactly the same engine on the 143. It is Yamaha’s Pure CF sound engine.

However compared to other models on the market right now, the Pure CF sound engine lacks string resonance and key-off Simulation.

The maximum polyphony notes of the YDP-163 is 192, which is more than enough for a digital piano of this caliber.

As a result, the YDP-163 sounds much louder and clearer. The sound quality is also much richer and fuller.

Nevertheless, here is a list of features that you would find on the YDP-163:

Being a console style digital piano, the Yamaha YDP-163 comes with three pedals. These are the same pedals that you would find on an acoustic piano.

The pedals on the YDP-163 also features half pedaling functionality. This is a really useful and crucial feature for intermediate and advanced players.

There are many different bundles you can find from different vendors. Some of them include a bench from Yamaha. Unfortunately this bench is not height adjustable. It is also quite small and narrow. Overall it’s not the most comfortable bench especially for long playing sessions.

For any digital piano, a good pair of headphone is always recommended. Even with the more powerful speaker system on the YDP-163, I still find myself playing with headphones a lot.

External monitor/speakers are not necessary since the speaker system on the YDP-163 is powerful enough.

The Yamaha YDP-163 is designed for beginners with a slightly higher budget.

It is also a good option for casual players or as a secondary practice piano.

However in year 2019, there are many better options on the market with similar price.

The Yamaha YDP-163 has decent sound and adequate key action. It features good quality and powerful speaker system. However compared to other models available in 2019, the Yamaha YDP-163 lacks in features. The GH3 key action could also be a deal breaker due to its heaviness.

The YDP-163 is about $400 more expensive than the YDP-143. These two instruments are identical in many ways.

The main differences are the key actions and the speaker system.

If you ask me, the more powerful speaker system and the flawed GH3 key action is not worth the extra $400.

For more details about the Yamaha YDP-143, click here for my full review.

The RHCII key action on the KDP 110 is significantly better than the GH3 on the Yamaha. They are both triple sensor actions while the GH3 on the Yamaha features synthetic Ivory key tops. However the Kawai feels better in terms of responsiveness, expression and timing. It is also much lighter compared to the GH3.

The sound engine on both models are both very good. However, the KDP 110 does have an edge that each note is individually sampled.

They have the same polyphony number. But the KDP 110 wins again with Bluetooth.

Another cheaper but better model is the Roland F-140R. It is a very popular entry level digital piano from Roland.

The F-140R has much more features than the YDP-163. Not only does it have Bluetooth, the F-140R has 300 more sounds to choose from. It also has a USB to device port and can record more songs internally.

Both instruments sound excellent. However, the GH3 key action on the Yamaha is a bit lacking compare to the PHA-4 action on the Roland. Even though I’m not a fan of the simulated escapement on the PHA-4, it does feel more responsive and expressive than the GH3. The PHA-4 is not exactly light but is still much easier to play than the stiff GH3.

I would recommend the Roland F-140R over the Yamaha YDP-163 for its superior key action and more advanced features.

Leave a comment to let me know what you think of this review. And if you happen to have some experience with the Yamaha YDP-163, please share with us in the comment below.