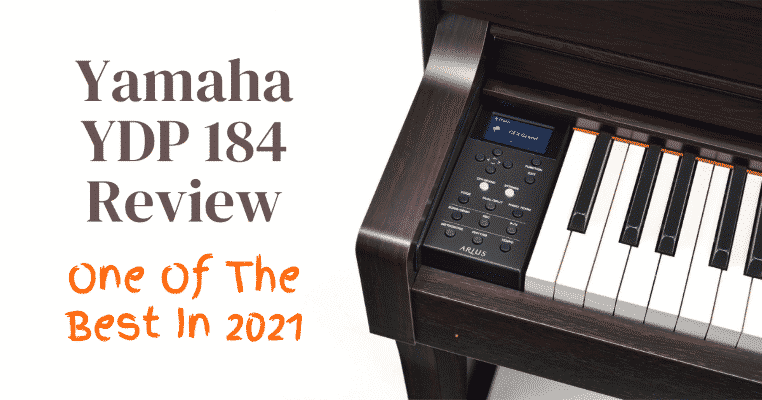 5 Reasons Why You Would Want This Flagship Arius

This popular flagship model from Yamaha has been the best piano around $2,000 since its release in Feb. 2018. It remains one of the best in 2021 for many reasons. In this Yamaha YDP 184 review, I will give you 5 reasons why it would be worth your money.

The Yamaha YDP 184 has a more traditional upright piano style. Its cabinet is lifted a lot more than any other model in the Arius line. In general, you can clearly see that the YDP 184 looks more like the Clavinova CLP 635.

It is of course much smaller and slimmer than an acoustic upright. I would say it’s a good in between and will fit most decor styles.

Like many of Yamaha’s upright digital pianos, the YDP 184 also has the red velvet accent at the end of the keys as well as around the joints of the pedals. I always appreciate these because they give the instrument a classical and premium look.

The key cover slides in and out from the cabinet. Not only is that more functional and easier to use, it also gives that modern feeling and announces to you that this is a digital piano.

For some reason, Yamaha decides to only offer the YDP 184 in rosewood. There’s no black color to choose. Personally, I don’t really understand their strategy here. But the YDP 184 is quite new and maybe Yamaha will push a black version later.

The finish is matte with wood grain, which looks and feels nice. The YDP 184 is also the only model in the Arius line that has a completely covered back panel, which you would find more often on a Clavinova.

The music rest of the Yamaha YDP 184 is fold-able backwards. That creates a clean and neat look when the instrument is not being used.

The size and shape of the music rest is identical to its predecessor, the YDP 181. Only this time they move the golden Yamaha label to the cabinet, thanks to its lifted design.

It’s wide enough to display about three A4 papers together and definitely wide enough for a score book.

However just like the YDP 181, the music rest is not tall enough. That’s not a problem with score book but if you are like me who print a lot sheets on A4 papers, they can quite often fold over the music rest from the top.

There is the small notch to hold the pages of your score book but because the music rest is tilted backwards, it doesn’t always work that well. The more expensive CLP 635 has those tiny clips that really helps keeping pages in place.

Thanks to the lifted cabinet of the YDP 184, the music rest is higher and more close to your eye level. I feel much more comfortable reading sheets while playing on the YDP 184 compares to other Arius models.

Another big upgrade you can find on the YDP 184 is the control panel.

You will immediately notice the large LCD display on the left side of the instrument. It makes fine-tuning your piano so much easier.

The controls of the YDP 184 are divided to the two sides of the key board. On the right side, you will find the power button and the volume slider. On the left side, there is the LCD display and some clearly laid out buttons.

The buttons on the left side can be divided into three sections. First are the navigation buttons to be used together with the display. Second are two voices button to quickly switch between grand piano sound and strings. The bottom section are quick function buttons and some of these have an LED indicator.

The Yamaha YDP 184 has 88 keys. They are made of plastic and covered with synthetic materials to mimic Ivory/Ebony.

Unlike the cheaper Arius models, these synthetic materials on the YDP 184 is much more prominent and actually helps a lot with grip and moisture absorption.

Since the YDP 184 is more like a Clavinova, it’s much taller than the other models in the Arius line.

When you are shopping for a digital piano around this price range, The most important aspect you need to pay attention to is the key action.

The YDP 184 uses the GH3 key action from Yamaha. This is one of the few areas that you would find similarity to other models in the Arius line.

The GH3 key action uses actual hammers in the action to simulate a more realistic feeling. The weight of the hammers are graded. As a result, the bass is heavier and the tremble is lighter, just like an acoustic piano.

The GH3 is quite similar to the GH3X key action you would find on more expensive Clavinova models, like the CLP 635. The difference is the simulated let off effect. It is to re-create that subtle notch feeling when play on a grand concert acoustic piano, also known as ‘escapement‘.

I would lose any sleep on that though. Because the let off is very subtle and doesn’t matter much to the overall playing experience. Also I find the simulated let off effect on the GH3X not very realistic. So I’d say it’s a good thing that the YDP 184 doesn’t feature that.

One thing I’ve noticed, as well as other reviewers, is that the GH3 on the YDP 184 is definitely on the heavy side. The forces needed to press the keys down are significantly more compares to key actions from competing brands. This is generally a bad thing unless you are specifically looking for some heavy action to build up your finger strength.

Overall, the keys on the YDP 184 are pretty quiet, smooth and well-built. I haven’t noticed any wobble to any of the keys.

If the heaviness doesn’t bother you, this key action could be a great choice.

What makes this sound engine amazing is the sampling comes from Yamaha’s world-famous 9 foot concert grand piano, the CFX.

The sound sample is then combined with Virtual Resonance Modeling to produce a natural, detail rich and dynamic experience for the YDP 184. To my ears, it is far superior than any other models in the Arius line. This alone is worth the upgrade from the YDP 181.

However, unlike the more expensive Clavinovas, the YDP 184 does not include the Austria made Bösendorfer. The Bösendorfer concert grand pianos has been around since 1828. They are hand made in Vienna and is now a subsidy of Yamaha since 2008.

The Yamaha YDP 184 is equipped with two 30 Watt speakers, which is again identical to the Clavinava CLP 635. This is a huge upgrade compares to the 20 Watt speakers on its predecessor YDP 181.

It is loud enough to fill an entire home and the volume is close to an acoustic upright.

And even at maximum volume, the sound quality remains detailed and natural.

The Yamaha YDP 184 certainly does not need help from external monitor/speaker.

The best features of the YDP 184 are the key action and the sound engine. These two combined makes the YDP 184 more of a Clavinova than an Arius. Another important feature that might be of use to you is the amazing recording capability. The YDP 184 can record internally 250 song, each with 16 tracks. This means some serious creative work.

Here are some other features that you might find useful.

The YDP 184 comes with a music rest, three pedals, a music book and a bench.

All three pedals on the YDP 184 works nicely. They are of course the damper/sustain, sostenuto, and soft pedal. Each of them supports half pedaling.

The sustain function of the YDP 184 is another big upgrade and is much better than any other models in the Arius line. The decay time of each note is much longer and the tone is richer and more dynamic. These combined with the Virtual Resonance Modeling creates a realistic and responsive damper action.

A good pair of headphones is always recommended for a digital piano.

Due to its high performance speaker system, you won’t need external monitor/speaker to perform for your family and friends.

The Yamaha YDP 184 is recommended for intermediate and advanced players.

It would be an excellent choice for home use because of its design style and build quality.

Thanks to its 16 track internal recording capability, the YDP 184 is also great for creative music works.

As for beginners, I can only recommend it if money is not an issue for you. Many advanced features will not be useful to you in the beginning of your piano learning journey.

The new Yamaha Arius YDP 184 is currently top of the line in the Arius series. It is a huge upgrade from its predecessor the YDP 181.

The design, sound engine and many advanced features makes the Yamaha YDP 184 more of a Clavinova than an Arius.

Though it lacks the Bösendorfer sample, the CFX and other instrument voices are nothing short of excellence. Combined with its strong speakers, you will not be disappointed by the sound of the YDP 184.

The key actions is realistic with triple sensors. It doesn’t have the simulated let off effect but I would say that’s a good thing.

There are only two things I could want more with the YDP 184. Bluetooth would be nice to have. And the key action is a bit on the heavy side. You will need to go to a store and try the keys for yourself before you make a purchase.

The biggest advantage of the Kawai CA48 over the Yamaha YDP-184 is the key action. While you get full wooden keys on the CA48, the keys on the YDP-184 are plastic.

There are also counterweights and escapements on the CA48 that you won’t find on the YDP-184.

The keys on the CA48 feels a lot lighter and fluid than the YDP-184. I find myself perform better on the CA48, especially for fast passages.

Sound wise, both are great. While you get Yamaha’s 9 foot CFX concert grand, you also get Kawai’s SK-EX and EX concert grand on the CA48. Kawai sounds more mellow and European while Yamaha sounds a lot more bright. It depends on your personal taste and the genre you are interested in. The YPD-184 does has a bigger polyphony number of 256 compare to CA48’s 192.

The Yamaha YDP-184 has a stronger speaker system than the CA48. The extra 20 watt output makes the YDP-184 much louder. Meanwhile, the Kawai CA48 has two extra speakers to produce clear treble notes.

Recording is another advantage of the Yamaha YDP-184. It can record internally up to 250 songs and each song can contain up to 16 tracks. The CA48 on the other hand can only record 3 songs without multi-track recording capability. This could be a big deal for those who are interested in mixing and composing their own music. To compensate for that, the CA48 does have Bluetooth.

Overall, both are great instruments at around the same price range. If you are more focused on piano play experience, I would recommend the Kawai CA48 for it’s better key action over the Yamaha YDP-184.

For more details about the Kawai CA48, click here for my full review.

Leave a comment to let me know what you think of this review. And if you happen to have some experience with the Yamaha YDP-184, please share with us in the comment below.