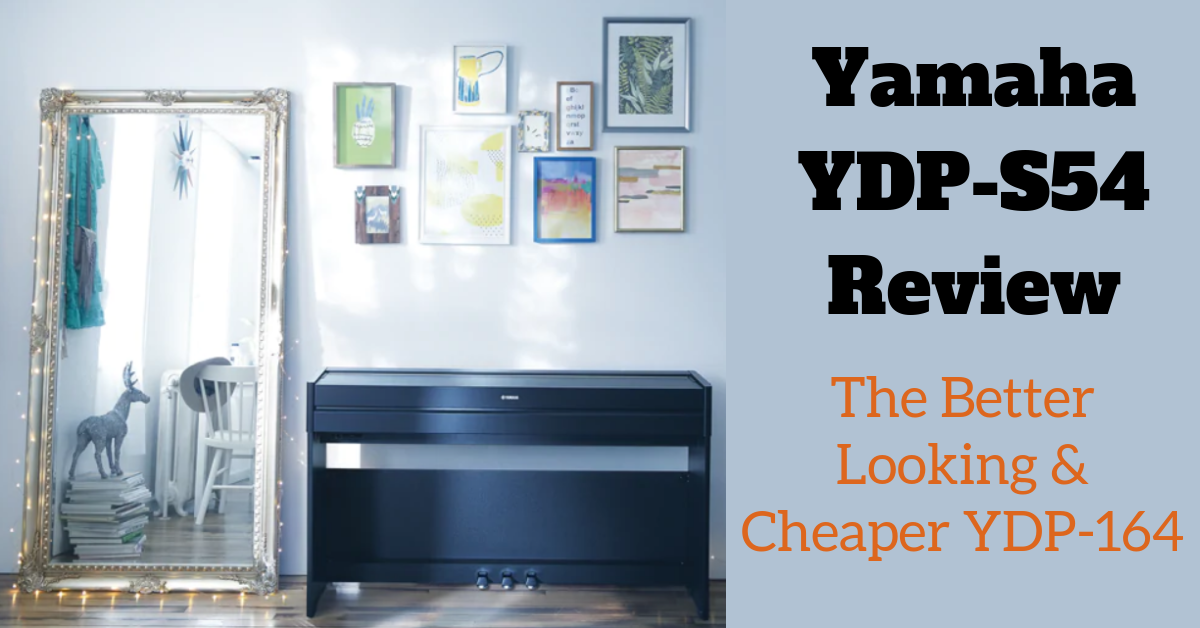 A Better Looking And Cheaper YDP-164

Not long ago, I did a review on the new Yamaha YDP-164. It turns out to be a pretty solid digital piano. But if you are interested in the YDP-164, you definitely shouldn’t overlook the YDP-S54. It is identical to the 164 but with a contemporary design. For about $100 less, you get a better looking YDP-164. In this Yamaha YDP-S54 review, let’s take a detailed look at this futuristic instrument.

The one difference between the YDP-S54 and the YDP-164 is the look.

While the YDP-164 has a relatively more traditional look of an upright piano, the YDP-S54 has an entirely different approach of design.

The Yamaha YDP-S54 is still considered a console type digital piano. But it is compact and looks contemporary.

There is no lifted cabinet or a standing music rest. The piano has a completely flat surface when not in use.

The key cover is a folding style one just like what you would find on an acoustic upright piano. It does have the soft-close feature that prevents the cover from slamming on the keyboards.

The side panels of the stand are also different from other models. They are solid panels with full width of the side of the instrument.

The flat top and the solid side panels create a compact and modern aura to the piano. It looks really stylish, I must say.

There are two finishes you can choose for the YDP-S54, the Black Walnut and the White Satin. They both have simulated wooden texture on the surface.

Like a traditional upright acoustic piano, the music rest on the YDP-S54 is hidden inside the key cover.

Once raised, you can flip down the panel and rest your sheet music on it.

The benefit of this kind of music rest is that it’s usually very wide and tall, which means you can display several pages at once if you print your sheet music on A4 papers.

It’s also nice to see that Yamaha has added some page holder mechanism on the front end of the music rest. This works well to prevent pages from sliding down the rest.

Overall, I enjoy using this type of music rest much more than the more common stand-alone music rest. When I put down the key cover, the rest is entirely hidden and when I put it into use, there are more than enough place to display as many pages as I want.

The controls on the YDP-S54 is identical to the control panel on the YDP-164. It is split into two parts.

On the left side, there is a single line of 7 buttons consisting of the most used functions and settings. Four of the seven buttons also has LED indicators.

Alternatively you can use the Smart Pianist app on your iOS device to tweak and customise the Yamaha YDP-S34.

The Yamaha YDP-S54 has a complete 88 piano keyboard.

The keys are plastic but they do have synthetic Ivory keytops for the white keys and synthetic Ebony for the black ones.

I’m happy to see that Yamaha has kept the red velvet at the deep end of the keyboard. I think it adds a nice accent and a touch of tradition to this otherwise futuristic instrument.

Being compact is the selling point of the YDP-S54. It is very slim, so much so that you can even place it in the hallway and you will be able to play it comfortably.

The key cover opens to an angel so that you can read the sheet music comfortably. This means that you need to leave a few centimeters (about half an inch) between the back end of the piano and the wall.

It features the GH3 key action from Yamaha. This action sits around middle to low end of Yamaha’s technology.

The GH3 key action uses actual hammers behind each key to simulate a more realistic feeling. The weight of the hammers are graded. As a result, the bass is heavier and the tremble is lighter, just like an acoustic piano. 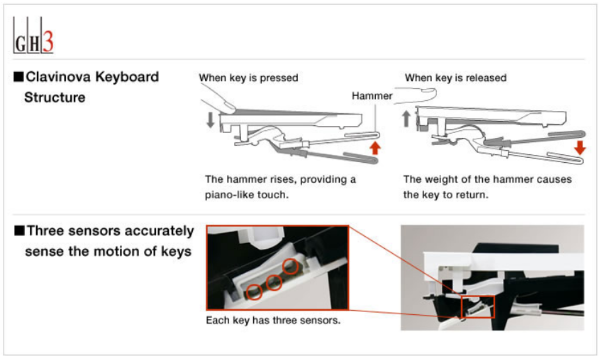 The synthetic Ivory/Ebony keytops not only adds realistic textures but also help with grip and moisture absorption during long playing sessions.

One thing about the GH3 action is that it is definitely on the heavy side. The forces needed to press the keys down are significantly more compares to key actions from competing brands. This is generally a bad thing unless you are specifically looking for some heavy action to build up your finger strength.

Overall, the key action on the YDP-S54 is quiet, smooth and expressive.

Consistent to other models in the Arius line, the Yamaha YDP-S54 features the CFX sound engine.

The CFX sound engine also features Damper resonance, String resonance as well as key-off samples. These are important nuances to create an authentic sound of an acoustic piano.

Just like the YDP-164, the YDP-S54 features two 20 watt speakers. They are significantly more powerful than the two 8 watt on its little brother the YDP-S34. It is almost on bar with the flagship Arius the YDP-184, which rocks two 30 watt speakers.

The piano sounds loud and clear through the speakers. I would say the volume is almost close to an acoustic upright piano.

Consistent to the YDP-164 and the YDP-144, the Yamaha YDP-S54 is not packed with features. The sound selection is limited and it doesn’t have Bluetooth for easy connectivity.

Yamaha makes a big selling point of its Smart Pianist app on iOS devices. And yet, to utilize that on the YDP-S54, you would need an USB cable and a dongle to connect your smart device. Not the best solution in 2019!

Here’s a list of features on the brand new Yamaha YDP-S54:

Being a console style digital piano, the Yamaha YDP-S54 comes with three piano pedals. They are identical to the pedals you would find on an acoustic piano. They are the damper/sustain, sostenuto, and soft pedal.

The pedal unit is similar to the one on the YDP-S34. They do not respond very well and they feel a little bit clumsy. They are also significantly noisier than the pedal unit on the YDP-164.

Thanks for its powerful speaker system, you don’t need external monitor/speaker to fully enjoy the Yamaha CFX sound engine.

The Yamaha YDP-S54 is best suited for beginners and intermediate players.

You can also use it as a secondary piano for home practice. The compact size and the contemporary look make it an ideal instrument for that.

The beautiful YDP-S54 is not exactly cheap. You do pay a premium for the Yamaha brand.

It has great sound engine and a powerful speaker system. The key action is the same as the flagship YDP-184.

Unfortunately, the YDP-S54 lacks many important features, especially if you compare it to other models on the market.

These two instruments are identical in many ways. The only major difference is the look.

While the YDP-S54 is compact and futuristic, the YDP-164 is a more traditional looking digital piano.

Being $100 cheaper, the YDP-S54 would be my choice since it would fit and look better in a home setting.

For more details about the Yamaha YDP-164, click here for my full review.

The F-140r from Roland is another compact and sleek looking digital piano. It is about $150 cheaper than the YDP-S54.

The key cover of the F-140r has a different mechanism. It slides open with the cover folding into half. When closed, it has the same flat surface just like the S54.

I would say the playing experience on both instrument has their own pros and cons.

Overall, the Roland F-140r has the same compact and sleek look, more features but a weaker speaker system.

In my opinion, neither is perfect but the Roland F-140r is definitely a worthy competitor to the S54. Unless you have your mind set on Yamaha, you should not overlook this popular model from Roland.

This is one of those cases. Even though the Kawai is around $150 cheaper, the keys feel more authentic to my touch and I enjoy playing on it more than the YDP-164. It doesn’t have that struggle of heaviness.

The sound of these two models are also very different. While the Yamaha is more bright, the Kawai sounds mellower. The Kawai however does have another advantage here. Each note on the KDP 110 is individually sampled.

They both have the same powerful speaker system and they both sound amazing with headphones.

Personally, I would recommend the Kawai KDP 110 for the more authentic key action, extra features and its cheaper price.

The Kawai KDP 110 however has a more traditional look more like the YDP-164.

Leave a comment to let me know what you think of this review. And if you happen to have some experience with the Yamaha YDP-S54, please share with us in the comment below.