The LX700 series uses the traditional upright piano design. The cabinets are lifted high and have the classical acoustic look.

Although they look big and bulky, I have to admit I kinda like that. Together with their realistic key action and good sound system, the new LX700 brings back the acoustic experience.

This new LX700 series uses Roland’s new PureAcoustic Piano Modeling to create the best piano tone that Roland can offer right now. Instead of sampling an acoustic piano, this technology uses computer modeling to re-produce every physical interactions when you press a key on a concert grand.

Based on Roland’s past products, I would say modeling make the tone more expressive and may someday replace the sampling technology.

The new LX700 features two grand piano modeling: the European Classic with a rich and mellow tone and the American Grand that is bright and clear.

There is also a big upgrade in the speaker system that you will find on the new LX700 series. Each model is equipped with Roland’s Acoustic Projection System, which promises to create realistic, rich and room-filling grand piano sound.

The flagship LX708 comes with a whopping 4 way 8 speakers system. Can’t wait to get my hand on that and see how it performs.

Key action is another upgrade you would find in the LX700 series. Although the entry level model LX705 uses the old PHA-50.

I’m not saying the PHA-50 is bad, but I would love to see a more advanced key action on this entry level model. This is again the market segregation we have been seeing from so many manufactures.

The LX708 and the LX706 uses a much better key action, called: Hybrid Grand Keyboard. The keys are much longer than older models, which makes them smoother and more responsive to play. The extra length also help reduce the difference in force needed to press the keys from edge to end.

All the LX700s have Bluetooth built in. And to celebrate the new product line, Roland launches a new app called Piano Every Day. The app is said to help motivate you to practice every day. It remains to be seen how that works.

THE DIFFERENCES BETWEEN MODELS 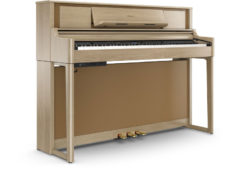 This is the entry level model in the LX700 line. It is said to replace the older HP605.

The LX705 has the most compact design of the LX700 series. It is equipped with a 2 way 4 speakers Acoustic Projection System.

The key action is also the least impressive of the LX700 line. It uses the older PHA 50.

The price and shipping date for the LX705 are as follows (subject to changes): 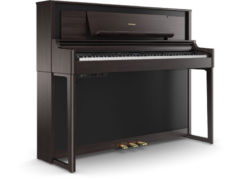 Next in the line is the LX706. This is the model that has all the important advanced features, with fewer bells and whistles compare to the LX708.

The LX706 is said to replace the older LX7. It is equipped with a 3 way 6 speakers Acoustic Projection System.

The key action you can find on the LX706 is the brand new Hybrid Grand Keyboard, just like on the flagship LX708.

There are three different colors to choose from: Polished Ebony, Dark Rosewood and Charcoal Black.

The price and shipping date for the LX706 are as follows (subject to changes): 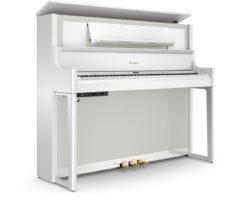 This one is said to replace the LX17 and is equipped with an impressive 4 way 8 speakers Acoustic Projection System.

Being the flagship of the line, you can rest assure to find the best key action Roland can offer right now, the Hybrid Grand Keyboard.

It has the biggest cabinet and features a folding key cover unlike the other models with a sliding one.

Another feature that’s unique to the LX708 is the openable lid on the top of the cabinet. This is said to subtly change the tone characteristics.

The LX708 has just been awarded the ‘Good Design Award 2018‘ by the Japan Institute of Design Promotion.

There are three different colors to choose from: Polished Ebony, Polished White and Charcoal Black.

The price and shipping date for the LX708 are as follows (subject to changes):

For more details, check Roland’s product page for the LX700.

Hey, can I solve your problems on your piano journey? Let me know your sticking points by taking this Survey…